TPO No. 6 Central Railway [Travelling Post Office Railway Number 6, Central Railway], running between Rockhampton and Longreach, opened on 17 September 1867 between Rockhampton and Westwood. No extensions were made until 1874 and it was 1879 before the railway reached Emerald. It was gradually extended to Barcaldine in September 1886 and Longreach in 1892

The travelling post office opened on September 1885 with the journey between Rockhampton and Beta railway station 25 km past Alpha. The service was probably extended to Barcaldine in December 1886 and then to Longreach in 1892 when the line reached there 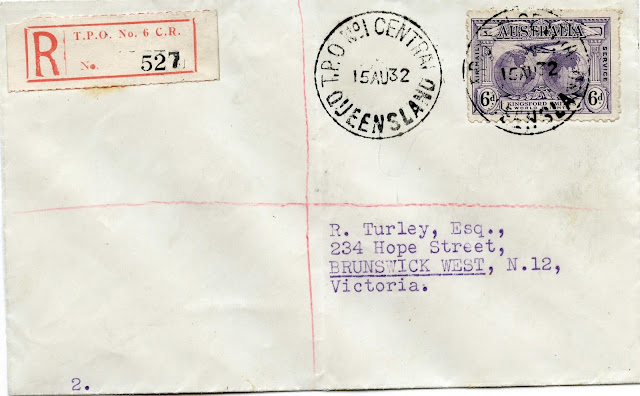 This is a listing of the various Queensland registered hand stamps and labels used in Queensland on Chalon and Sideface postage stamps and postal history.

A number of different registered handstamps are known.

There registered handstamp comprised two lines with the first line containing the word registered and the second line the name of the post office. This type of registered handstamp came in two different sizes, one with small type and the other with large type. As well a single line registered handstamp with the post office name omitted was used at the Calliope, St George and Yaamba post offices.There was also an R in oval registered handstamp that was used in a number of post offices from around 1891 onwards. These are best collected on piece or cover in order to identify the post office associated with them.A number of the larger post offices also used dedicated registered date stamps. Beginning in about 1908, registered labels began to be provided to Queensland post offices. Again, these are best collected on piece or cover. There were also printed registered envelopes, and these are exceedingly scarce, especially used.The rarity rating is Common, for the most commonly found handstamp cancels, Scarce for those that are less common but still readily obtainable, Rare for hard to get handstamp cancels, 2R for very hard to get handstamp cancels and finally 3R where only 1 or two examples have been seen. All covers and postcards with complete handstamp cancels and labels command a premium as do those registered cancels on piece or postage stamps that have a complete strike. Registered labels, usually only surviving on cover from this period, are extremely rare and desirable.Use the pages (at the top), labels or search function to find the information you are seeking. All material is from my own collection unless stated otherwise.You can contact me on jeremy2929@gmail.comCopyright Dr Jeremy Hodes 2018-20 for content and my images. Copyright for all other images and auction text descriptions rests with the organisations and individuals listed at the image level

My Other Queensland Stamp Blogs